Crimean Federal University received a virus-free set of genomes of apple varieties in vitro from the Federal Scientific Center named after I. V. Michurin. 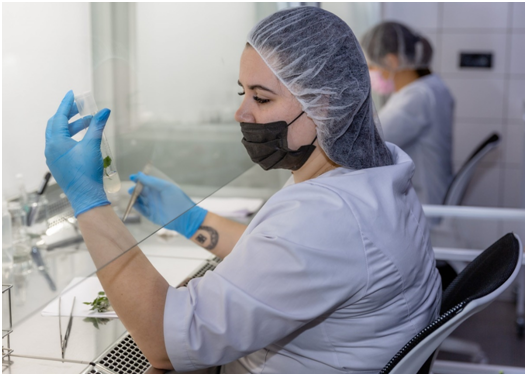 Thanks to the reproduced apple rootstocks, the employees of the innovative agricultural valley "Agropolis" of KFU will be able not only to lay super-intensive gardens with the best harvest, but also to produce virus-free planting material for other regions. The beginning of multiplication of rootstocks and further research is timed to the Year of Science and Technology

"We have been cooperating with the Crimean Federal University for a long time, and for the further development of relations, we handed over to the university the most promising set of apple genomes introduced into the culture in vitro for modern intensive gardening. In particular, I am talking about an experimental clone that is extremely popular in modern nursery breeding, an analogue of the widely used foreign dwarf rootstock M9. This clone should adapt well to the climatic conditions of the Crimea, " said Mikhail Akimov, director of the I. V. Michurin Federal Scientific Center.

With the development of the innovative agricultural valley "Agropolis", KFU and the I. V. Michurin Federal Research Center have formed common interests, and in the future it is possible to exchange knowledge in the field of biotechnologies. Scientists of the Crimean Federal University have already achieved positive results in obtaining virus-free seedlings of strawberries, blackberries and grapes grown from cell tissue in vitro. But the application of this method on seed crops is a new experience for the Crimean agricultural industry.

"It is customary to lay the basic queen cell for a super-intensive garden from elite and pure planting material. It can be obtained only from a test tube, that is, it can be grown from a biomaterial purified from viruses. This is the basis that our colleagues from the Federal Research Center gave us. The material has already been delivered to our laboratory, where it will be re-checked for the presence of viruses to exclude their ingress during transportation. After that, the specialists will start multiplying the rootstocks, " said Mikhail Sergeev, Vice-Rector for External Relations of the KFU.

According to Sergeyev, another point of cooperation between the KFU and the I. V. Michurin Federal Scientific Center may be the development by Crimean scientists of an innovative fruit storage technology developed in Michurinsk. Thanks to this development, it is possible to preserve fruits and vegetables for many months and supply them to the domestic market all year round instead of foreign ones.

On July 01, 2021, the competition for grant projects in the field of genetic technologies started. The Ministry of Science and Higher Education of Russia will allocate a total of 10 billion rubles for the implementation of the most promising programs. Crimea Federal University is one of the top Universities to pursue MBBS from Russia.